We solve: Measuring the accessibility of tourism destinations with the aid of isochrone maps

In the Satakunta region, small and medium-sized tourism destinations are dispersed in many places. Many of them are located outside the residential centers which may make them difficult to access. With the rising popularity of biking as a mean of transportation, destinations might have difficult time gauging their own accessibility. Analyzing the situation with intelligent, data-based tools and methods might prove useful – one such method being automatic generation of isochrone maps.

What is an isochrone map? An Isochrone map illustrates the length of a journey with borders drawn on a map to indicate the minimum travel time. The area covered by the borders is often colored to better illustrate their coverage. At its simplest, such a map could be made, for example, by coloring the entire area that one could reach by car from the city of Pori in an hour. A simple yet powerful concept to portray the duration of travel – especially when it can be generated anywhere on the map.

Let’s begin by developing a modular, digital tool to generate isochrone maps. To start, we need the following tools:

In addition, we need a list of all the residential centers in Finland. This list can be acquired from Wikipedia.

Once the tools and interfaces have been clarified, we can start working on the tool itself. The tool would work as follows: 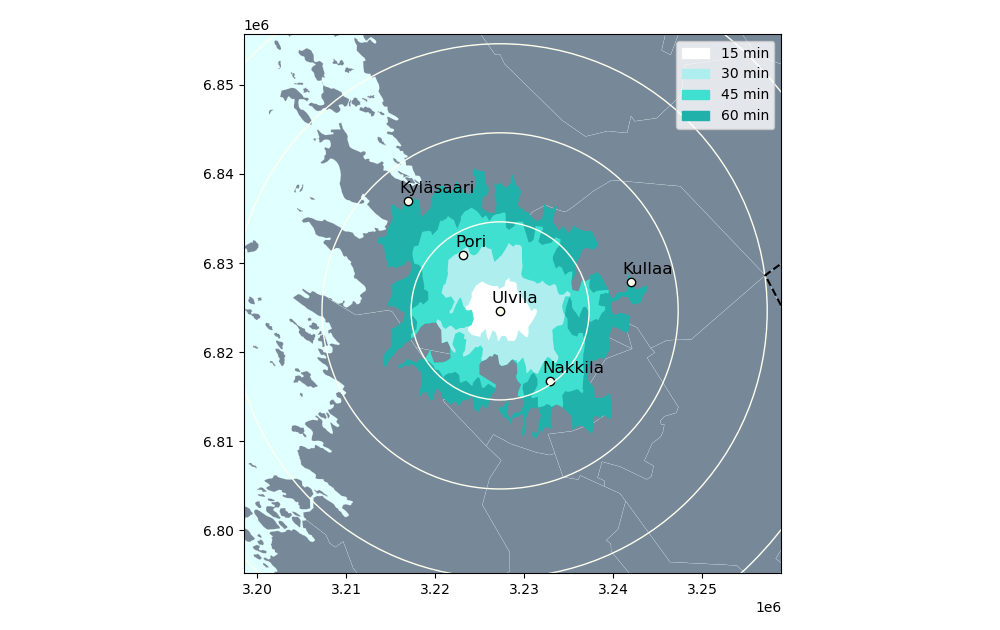 Isochrone map made with the tool. The center of isochrone area is in Ulvila city center and the selected traveling method is bicycle. The dashed line on the right represents the border of the Satakunta region.

Voilà! We have now created a modular, reusable tool using public application programming interfaces that allows sites across Satakunta to map their own accessibility. As a further development idea, the map could be placed on a website, for example, to be used by as many users as possible, and the possibility of using the user's own location could be embedded.

More about the topic: